With customers arriving at wayside inns by car, new china was produced by Royal Doulton to depict automobiles rather than the traditional stagecoaches. The Motoring Series pattern D2406 was registered in 1905 and continued up to 1928, according to Louise Irvine (see references). The designs were penned by George Holdcroft and he included his initials as part of the registration numbers on the automobiles on two of the designs. It is interesting that there is a diverse collection of utensils but no cups, saucers or teapots. It is assumed that this is normal for an inn at this time.

Irvine also lists a second pattern number D3318 as being used on the Motoring Series Ware; I have not seen any examples. However, there is a third pattern D3625 Motoring Willow pattern of which only a 10 ½ inch rack plate exists.

There are nine different motoring series ware designs used on this D2406 range. Six of the designs were used on the plates and other china and two are unique to particular pieces. All are titled as part of a transfer process except one untitled design which is commonly called ‘Yokel and motorist outside Chequers Inn’.

The dark brown outline was produced by a transfer process and the colouring was applied by hand. It would seem that the title was not always part of the image transfer as the title position can vary. Also the hand colouring does change and automobiles or clothing for example can be different for the same design on different pieces.

Where pieces have one image for the front and the design incorporates trees to the underside, there is considerable variety as several tree transfers were used. 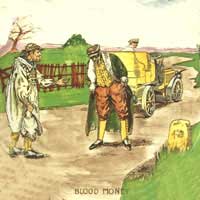 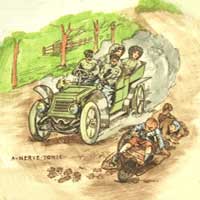 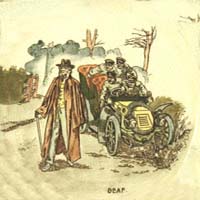 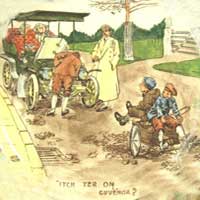 View pattern >>
Room For One! 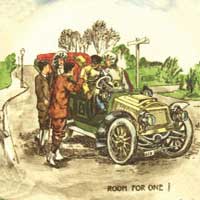 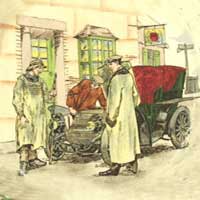 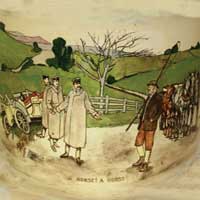 View pattern >>
After The Run 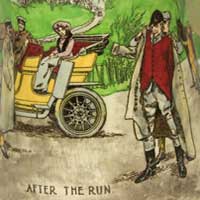 View pattern >>
The New And The Old 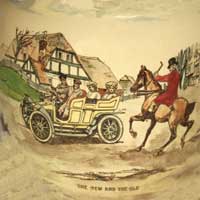 Normally on the underside under the glaze there is a dark brown printed Royal Doulton lion and crown mark, see below.

In addition there is a painted pattern number D2406, often with an initial of the painter. Also on many of the wares, particularly the plates there is a date in the form of 7 – 06 (July 1906) stamped into the china. More rarely seen is a stamped circular blind mark that reads Burslem/Doulton/England.

All sizes are given in inches. For jugs etc the height is a vertical height from base to rim not the distance along the surface of the item. The easiest way to measure is to sit the piece on a level surface and place a flat object e.g. a book on the rim and measure the gap. With humidors with the round lids on it is more difficult to get vertical height but my measurements have been made using callipers.

Because of the clay mixture and finishing and firing processes, size differences are regularly noticed and plus or minus at least 1/8 inch can be expected from the given figures.

I have just valued the pieces on a points basis (0 to 2000) which allows comparison between items. Rarity is not always reflected in value, as a less significant smaller piece will usually sell cheaper than a ‘showy’ larger item of the same scarcity. The values are most difficult part of this website, particularly as we have seen some slackening of prices over the last few years.

Values are based on items in very good condition with no cracks or restoration. All these pieces are around 100 years old so some slight wear plus surface crazing is to be expected.

Although not part of the Motoring Series Ware there was another early Doulton plate featuring automobiles. For completeness this plate has been added separately, See Motoring Willow Pattern. 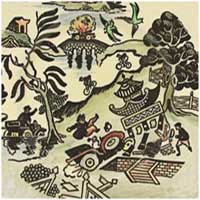 Royal Doulton Series Ware Vols 1 - 5 by Louise Irvine – Published by Richard Dennis. This series of books is an excellent introduction to the utensils and patterns of the large output from the Doulton Pottery. Vol 2 Old Worlde Imagery published in 1984 has a couple of pages (56 – 57) where six plates and three jugs are illustrated from the Motoring Series together with brief details.

The Motor Car in Art by John Zolomij published by Foulis 1990. By far the best book written on automobile art and has a section on ceramics depicting motor cars. On pages 168 – 169 there are colour photographs of platter, plates, tankards, jugs, bowl, spittoon, flower vase, humidor and jardinière.

RoyalDoultonMotoring.com is run by Thomas Brierley for the benefit of fellow collectors and enthusiasts of Royal Doulton Early Motoring Series Ware.

The website exists as product listing and valuation guide aswell as a source of reference for Royal Doulton motor car themed products.

This site is the continuation of earlier work created by Tony Clark. Without Tony’s years of research, knowledge, and historical verification the enclosed would not be possible. It is with our sincere “Thanks” that we continue his work.